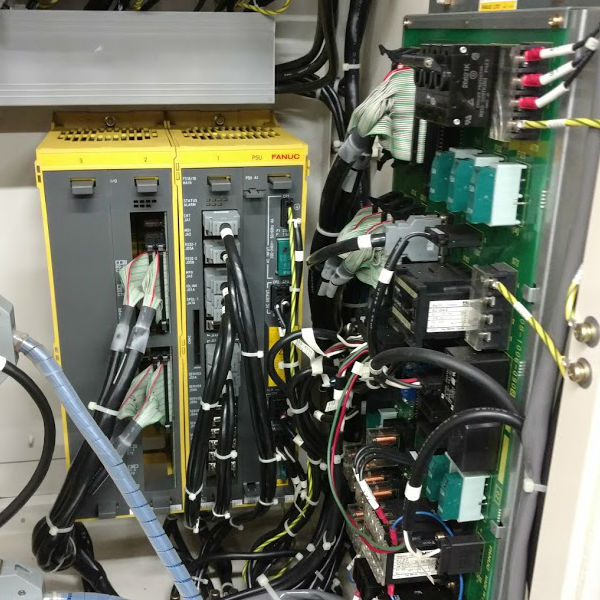 Back in December of 2016 we had a problem with our Fanuc RoboDrill here at Winn Mfg., manufacturer of the Winn Speed Lock Vise. On a Monday morning I had our tooling and fixture machinist, who was working on a new fixture for a job on our Fanuc RoboDrill (Circa 1997 with 10 tools and a side pallet changer) . He goes to turn on the machine and nothing. There is power to the Main disconnect and power after the disconnect, but that is it. No power going to the control or the main magnetic relay. I called OptiPro in Rochester, NY for service and they were not able to figure it out on the phone, so they sent out (2) technicians. After they were here about 2 hours, they were stumped and started pulling boards looking physical damage and found a burned up transistor on the Fanuc Main Power Supply A16B-1212-0901.

My immediate thought was great, here’s the problem, get a new board in swap it out and we are up and running. The problem is that this power supply has a battery on it that holds all of the parameters, O9000 Macro programs, part programs and tool offsets. Thankfully my son (Who hasn’t worked for me in over 15 years) worked for Fanuc for about 8 years. He convinced me to do parameter and program back ups for ALL of my machines years ago. So I had all the parameter files for this machine and we back up the part programs on a regular basis. All I had to do now was get them all back in the machine.
So we got the board in late on a Monday and started the re-boot on Tuesday morning. So, by 6:00 pm on Tuesday I had it alive with a few things not quite right and went home. Wednesday I loaded the O9000 Macro programs which control the pallet changer and I found out they control the Tool Changer too. By 10:00am on Wednesday, the machine was running again.

Re-booting the parameters on a machine like this is quite the process and quite a few phone calls back and forth with Fanuc. ( I wouldn’t want to do over the phone tech support for all the tea in China.) You have to load the option parameters first and shut the machine off. Then set up the RS-232 settings so you can load the rest of it and shut if off. Then try to load the rest of the parameters and they won’t all go in because I found out later that I needed to change a parameter to allow them to be loaded with the RS-232. But, I was able to key in the 150 or so missing parameters in by hand. Fun…. The Marco Programs and the part programs went in easy.

There is a certain sense of accomplishment or satisfaction in doing all of this. I realized when I got done that this was the 7th or 8th machine that I have had to re-boot since I have been involved with CNC machines over the past 40 years. Oh yeah, the best answer I can come up with as to why this happened is, that we had snow storms over that weekend and the power was surging and maybe (?) the main shut off had been left on, but we’re not really sure. It could have just shorted when the machine was turned on the day.

Thanks for reading
Steve Winn