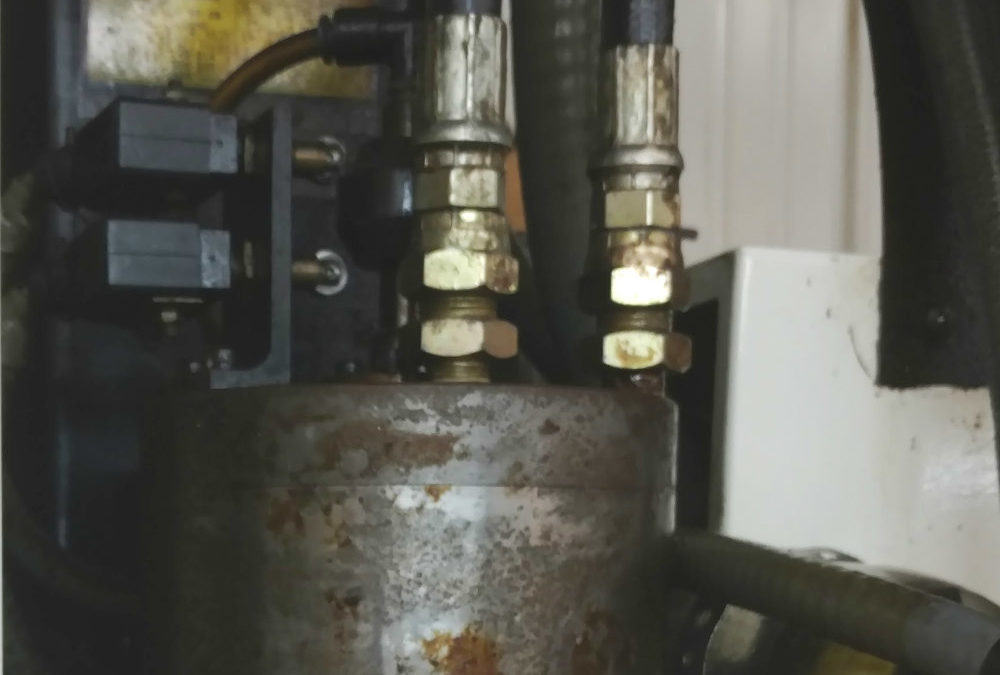 At Winn Speed Lock we have a 1997 Kitamura Mycenter 3 vertical machining center with a pallet changer. We use to produce some of the parts for the Speed Lock 6″ vise with the integrated quick change jaw system. We purchased this CNC machining center used in 2004.  There has been an ongoing intermittent problem with the Automatic Tool Changer (ATC). It has a twin arm style ATC. What was happening is that after the arm changes tools and turns back to is ending/final position and it would stop short. This caused the machine to stop its operation. The arm would  need to be returned to its final position to clear the problem.  The only way to do this quickly was to put a handmade piece of metal on the proximity switch that tells the control that the arm is in its final position and do a manual ATC. This would happen maybe once a week. Recently it became 4 to 5 times a day. As the problem worsened, it was really decreasing our output of the sand castings we were machining.

After many calls to the OEM’s service dept. they were leading us to the brake on the DC motor that turns the arm. Stating that it is old and dirty causing it to grab to quickly. So we disassembled it, cleaned it and re-adjusted it and it was better for one day. (Pure coincidence) The following day it was a lot worst.

One of the problems with buying and running older CNC equipment is that the people in the service departments may not have been there when the machine was designed, so they don’t have any first hand knowledge about the software and the logic behind the way some of these miscellaneous machine functions work. So after having a person up on top of the machine, making minor adjustments to the brake, while another person manually activated the ATC and watching many tool changes. We realized that the brake doesn’t engage until the arm is stopped. Regardless of whether it is in the proper final position or not. Also the brake adjustments aren’t making any difference in where and when the arm is stopping, because it is only meant to hold it in position, not stop it. I go through some old notes and at some time the OEM had told us that the tool change had to finish in a certain amount of time or it would shut down. What we determined is that there are two switches that tell the CNC control to stop the arm. One is on a cam lobe that indicates the proper arm final position and the other is if the tool is clamped in the spindle. (See photo) So if the tool clamp switch isn’t on before the cam lobe switch comes on, the arm stops.

The logic is, if the tool is not clamped in the spindle correctly the arm shouldn’t turn away, because it will drop the tool. This switch was not (probably never was) adjusted correctly. It was activating but wasn’t coming on quickly enough for the software to see that the tool was clamped. So the software would stop the tool change cycle. Because the arm was already turning to its final position and the tool clamp switch would activate (although too late). The arm would get close but not all the way to its final position. We moved this switch maybe .030 and the problem was gone.

These types of problems are frustrating and require the time and effort to really think them through. You never want to shut down the machining production, because you need to keep the CNC machine going to make your deliveries. With this problem, it was starting to effect our production and profitability. Now that we have solved this issue, maybe I won’t get rid of this machine.