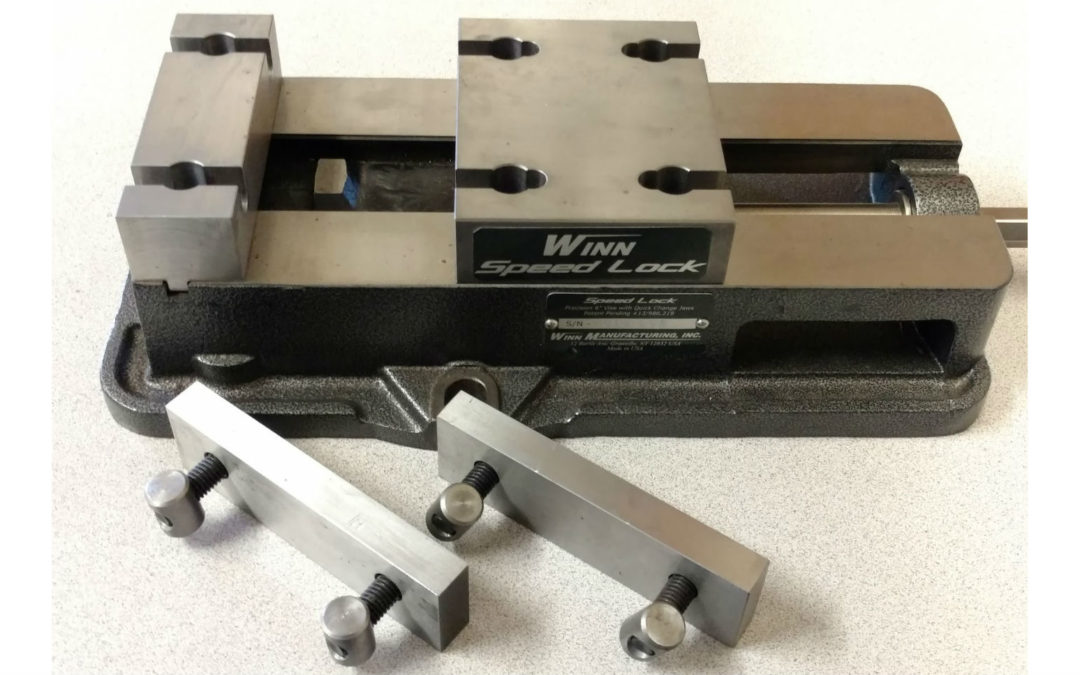 The Winn Speed Lock Vise supports faster vise jaw changes than any other quick-change system on the market today. Made in the USA by Winn Manufacturing, Inc., this 6” angle lock vise incorporates a screw / nut mechanism that was designed originally by Kurt Manufacturing Co. Precision vises from Kurt are better-known, but the Winn Speed Lock Vise is the better choice when you perform a full product comparison.

Kurt describes itself as the industry leader in workholding vises. The company earned the title with an angle lock system called AngLock®, a registered trademark of Kurt Manufacturing Co. AngLock® technology forces a movable mounting block downward as it’s tightened in the forward direction. It also uses a spherical segment to transfer the forward clamping force to an angled, downward clamping force.

Kurt Manufacturing Co. set the standard, but Winn Manufacturing Inc. improved upon it. Since January 2014, the Winn Speed Lock 6” Vise has competed with Kurt on features, quality, and price. The Winn vise also includes an integrated quick-change vise jaw system that saves machine shops time and money. How fast is it? Winn’s patented technology lets you change vise jaws in just 30 seconds.

That’s not the only difference either. The Winn Speed Lock Vise is the only quick-change system that doesn’t require a custom vise jaw. Instead, machine shops can use their existing standard hole-pattern vise jaws. For shops with an inventory of custom vise jaws, integration with the Winn Speed Lock Vise is as simple as adding a round nut and 1/2-13 socket head screw.

The Winn Speed Lock 6″ Vise includes a vise handle, a set of hardened vise jaws, a set of aluminum vise jaws, and 12 sets of round nuts to hold the jaws to the vise. The body of the Winn vise is made of ductile iron. The surface of the bed is flame-hardened. The bed height of 2.875″ is controlled to +/-.0005. All machined surfaces are square and parallel within +/-.0005.

What about costs? The Winn Speed Lock 6” vise sells for $660 (USD). The Kurt 6” vise sells for less, but only comes with a vise handle and a set of hard jaws. By the time you buy Kurt’s set of aluminum vise jaws, the costs are so close that you need to consider value. If you pay just a little more for the Winn Speed Lock Vise, you’ll get a milling vise with an integrated quick-change vise jaw system that’s the fastest on the market.

Does Kurt offer a quick-change vise jaw system of its own? Yes, they do. It’s called DoveLock. It’s not as fast as the Winn Speed Lock – and you’ll have to buy four sets of jaws. You might pay less depending on where you buy them, but the cost of four jaw sets plus the master jaw could be almost as much as the vise itself. You’ll have to do the math yourself, but the DoveLock system might not be a bargain after all.

With the Winn Speed Lock Vise, you don’t need to buy special jaws. Winn Manufacturing’s system lets you make your own jaws inexpensively. You can purchase soft jaw blanks from any of the many companies that supply them. By simply adding the Winn Speed Lock round nuts, you can use custom soft jaws that have been machined and that have a standard 3.875 hole-to-hole bolt pattern.