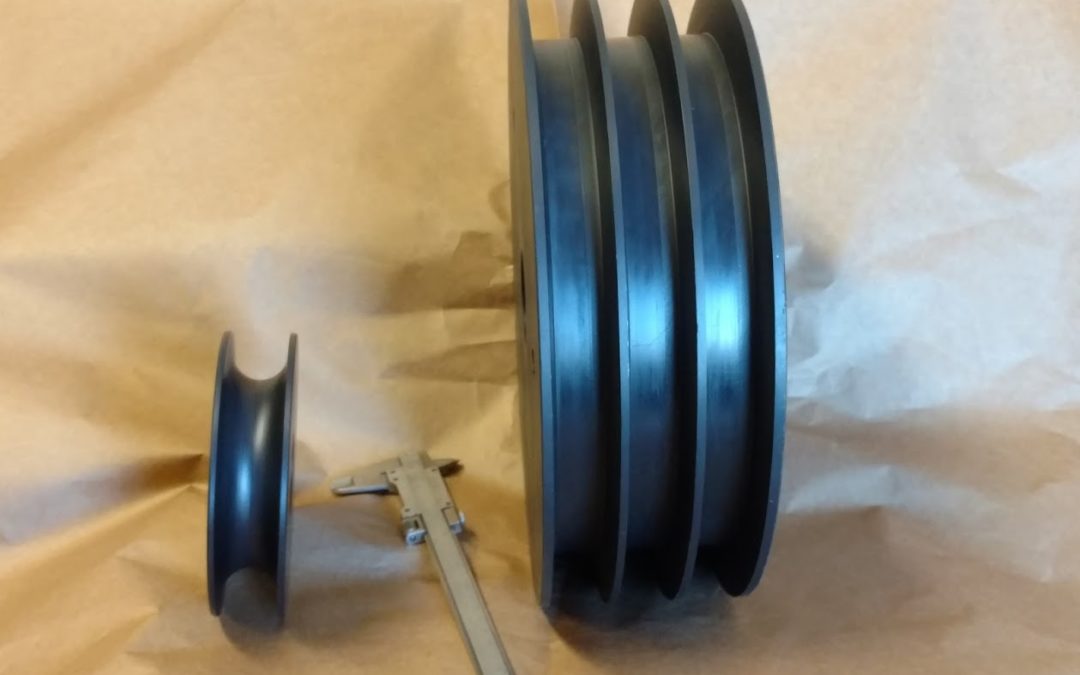 Recently at Winn Mfg. we received an order for two different rope sheaves made from MDS Nylon. The machining for these parts was done on two of our CNC lathes. These particular parts were a little different from the type of sheave we normally do, in that the grooves are very deep. Over 1 inch deep per side. Most of the sheaves we do are made of cast iron or steel and the groove depths are usually no deeper than 5/8 of and inch.

One of the biggest problems machining Nylon is that the chips don’t break. We have found that the chips that wrap around the tools get between the workpiece and the cutting tools. This can cause the work piece to move or pull out of the jaws holding the part. This was one of the issues we had with these parts, because some of the tools paths had cutting directions moving away from the chuck, which was causing  the parts to move. How we solved the problem with this group of parts was, we created multiple program stops in the program to keep clearing the chips and this worked, but was time consuming. Both of these parts were ordered in low quantities (less than 5 pieces), so it worked out okay.

When reviewing the job, I remembered than we had machined some thin walled cast iron sheaves in the past that we had a similar problem with the parts moving in the chuck. Because the walls of the castings were so thin, it didn’t allow us to use a high enough chuck pressure to hold the parts without distorting the castings. This is similar to the Nylon, because if you increase the chucking pressure, the Nylon distorts or the part tries to squeeze out of the jaws.
To overcome this issue, we  machined a sets of chuck jaws with a 3 degree angle. The step in the jaw was approximately .250 deep and was larger towards the back of the jaw. On the OD of the sheave we machined a matching 3 degree angle. This had the effect of pulling the part into the jaws and it kept the parts from trying to pull out of the jaws. So we are going to use the 3 degree jaw configuration  with the next order we receive for parts like this.  This will hopefully work better.